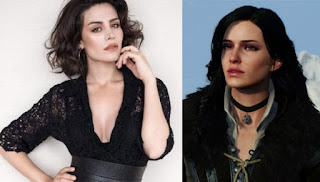 Yennefer: Stop. Stop it, you’re fidgeting like a child. Have you never put on a jacket before?

Geralt: Not one this tight.

Yennefer: If the coat’s a problem, flesh is always a good color on you.

Geralt: The council would love that.

Yennefer: Seriously consider your scars quite the conversation piece. This one I got from a feisty young basilisk. That one from the fangs of a bruxa. And this one I gave myself just to fill in the unmarred space in my pectoral region. Thought I should even it out a bit, you know? Geralt: That one is from you, you bit me.

Yennefer: I know… Damn. It is tight.

Geralt: It doesn’t matter, I’m not feeling well at all.

Yennefer: Can you even get sick?

Geralt: Witchers get colds, same as you.

Yennefer: You really don’t want to go, do you?

Geralt: I’m not meant for balls.

Yennefer: And you think I am? Marauding around a room full of mages who can’t wait to see me fail. Ready to pounce at a moment’s weakness. All my friends want to fuck you.

Geralt: Well, you should have led with that.

Yennefer: We’ll be lucky if Sabrina is even wearing part of a shirt. My guess is she’ll sport an illusion designed to blur just her nipples. You can trust Triss will be stealing looks at you all night. And I’ll let her because that girl deserves some happiness. I like to think even Vilgefortz will ogle your pronounced posterior, all while parading his elven minx just to appear shocking. Let’s face it, so last century.

Geralt: And what of you, parading your Witcher?

Yennefer: I don’t parade you for shock value. I parade you because you’re ridiculously attractive. I trust you’d say the same for me.

Geralt: Is that all we are to each other?

Yennefer: Of course not. Look at us. We’re a power couple.

Geralt: Right, I kill monsters and you make them.

Yennefer: You know it’s been years since I’ve dabbled in mutations. How long will you hold that against me?

Geralt: Just right now when I don’t want to go to your ball.

Yennefer: But I’m one of the good ones.

Geralt: Sure. In a sea of disgraceful ninnies who bend nature to their will.

Yennefer: You don’t have to talk to those people.

Geralt: Can I get drunk and punch them?

Yennefer: Would you shut up and put on your ill-fitting coat?

Yennefer: Then you may drunk-punch my colleagues. Just do it outside and make sure it’s someone I don’t care for. Shouldn’t be difficult. I hate everyone except you.

King: Just this once?

King: It will be our secret then, the brotherhood will never know.

King: Surely you can make an exception for me? Pretty please?

Yennefer: No thank you [hand gesture/spell].

Do you feel weightless, or do you feel every one of your fatty repulsive pounds pulling you to your death? Not that your feelings matter really, since I am the one holding you up, and I am the one who is going to drop you, as soon as I’m done telling you my feelings.

The way you eat your breakfast is revolting. Cream in your whiskers. And the people who hate you most – every one in your kingdom it’s safe to say – don’t even see that side of you. They all hate you for their own reasons. How you’ve abandoned their needs while gilding your gates.

None of that bothers me by the way. Really it’s about the creamy whiskers … and the way muffin crumbs get stuck there… it truly makes me want to vomit. Then there’s the creeping. Always creeping into the beds of chambermaids who do not want to clean your dick with their bodies. Creep creep creep. And on top of that, you’re very, very dumb.

Bear in mind I have no qualms with any of that really – again, creamy whiskers. But then while talking a walk, so that I may advise your feeble mind on acts of war, you ask if you can touch my breast. The answer was a polite no thank you. But the takeaway, your highness, is that you are in the palm of my hand.

I’m going back to work.